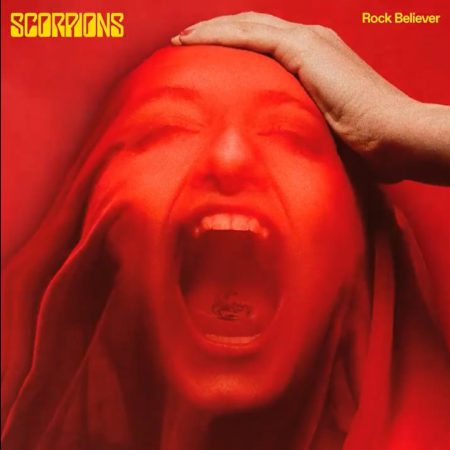 Possibly the most decisive moment in the genesis of SCORPIONS’ brand-new, breath-taking album Rock Believer was captured in a song by Klaus Meine, who penned the album’s lyrics: “Gas In The Tank”. Says Meine: “Before we started working on the new album, we asked ourselves: Is there still enough gas in the tank?”. Does a band whose musical career will span fifty years from the release of their first phenomenal album success Lonesome Crow in February 1972 to the arrival of Rock Believer in February 2022 still have the bite, the toughness, the brute force that it takes to create and record one or two dozen brand-new tracks? Aren’t their 18 studio albums to date, their platinum and double-platinum awards garnered around the globe enough for these relentless musicians? Is there still enough gas in the tank to keep going? One of the quintet’s songs provides the answer to these questions: “Let's play it louder play it hard, Laid back and a little dark, Give me a dirty riff my friend, There's gotta be more gas in the tank.”

The result consists of 16 awesome tracks, each one of them a lyrical short story, minimal poems in prose, presented in a lavish sonic guise, featuring the SCORPIONS’ characteristic trademarks from the early 1980s, yet produced from a 2020s perspective. The wealth of inspiration from their longstanding career is an overflowing treasure chest that forges an arc between yesterday and tomorrow. Klaus Meine’s comment on “Roots In My Boots” in fact applies to the whole album: “The new material sees us return to our roots. We simply wanted to reactivate the original SCORPIONS DNA – great riffs, strong melodies. We tried to transport that live feel to the studio with all five of us playing in one room again at last. Having Mikkey Dee in the band is like a shot of fresh energy and real fun.”

The good found in the bad, to borrow from the great philosopher and Stanford professor Paul Watzlawick, was the basis of this extraordinary album. The Covid pandemic put the brakes on public life, travel and work. “We had already started to talk about a new album back in 2018,” recalls Rudolf Schenker. A year after that, Klaus Meine had completed the first lyrics. And then Covid arrived. Touring Australia, New Zealand and Southeast Asia, the band just about managed to get back to Europe in time, and all of a sudden nothing was the same. Concerts were cancelled, arenas closed down. “In a way,” says Matthias Jabs, “the situation was a blessing in disguise for us.” The band had already hired a studio in Los Angeles, but their plans were thwarted by fate. Instead, the musicians found themselves stuck at home, three of them only a stone's throw away from the legendary Peppermint Park Studios in Hanover, and as soon as travel restrictions were relaxed, Pawel Maciwoda and Mikkey Dee were able to join them from Poland and Sweden respectively, “and everything suddenly felt like it had back in the 1980s, when the five of us rocked together, hanging out at the corner pub in the evenings and talking about our music,” Matthias Jabs reminisces.

Those basic elements of our society that make up rock music aren’t always light and weightless as they swarm through space and time. On the contrary: Those atoms push forward relentlessly, often coming across like ancient Norse warriors, bringing chaos and passion, earthy, sweaty, all stomping machines and crude rhythms. As the lead single, “Peacemaker”, goes: “The evil monster is still alive, Even after all this time, It's been written in the stars, Forever love stop the war. Peacemaker peacemaker, Bury the undertaker. “I was just playing around with those words. Peacemaker bury the undertaker ... what’s the meaning behind it? At a time when so many people have died and are still dying of Covid, from devastating wars and other senseless crimes, it makes you feel like the undertaker must be working overtime. In a peaceful world after the pandemic, it will be time for the peacemaker to rule ... that’s an image that really appeals to me,” says Klaus Meine.

Rock music, as perceived, written, composed and performed by the Scorpions, can be a chronicle of current events. A complete oeuvre that captures not only the socio-political characteristics of our times, but sometimes even precedes them. Attitude is the appropriate term, attitude as a stereotype of rock culture. Few other rock bands with German roots can tell us as much from their own experience about the world and its dark sides as the SCORPIONS can. There’s no continent they haven’t toured, very few countries around the globe where they haven’t performed. As they say on “When Tomorrow Comes”: “Good morning world how do you feel, You look so sad, The clock is ticking and precious time will fade away.” Klaus Meine wrote the lyrics for that song during the pandemic: “It’s addressed towards the young generation, who will soon take over the responsibility for our planet.”

The genesis of Rock Believer was spawned by an experiment: “For the first time, I’d received lyrics from Klaus to compose music to them,” remembers Rudolf Schenker. “It had always been the other way round, first the music, then the lyrics.” Rudolf Schenker sat alone in his car, listening to the lyrics one by one as he drove through the streets. “I immediately had ideas for the compositions, the words really started to sparkle.” The result is an album which impresses with its frequently harsh, sinister sound. “We basically agreed to do just a few ballads, such as “When You Know (Where You Come From),” says lead guitarist Matthias Jabs, who wrote “Hot And Cold” and “Crossing Borders”. The album was produced by the band themselves with the support of Hans-Martin Buff. All in all, the sessions at the Peppermint took over a year.

SCORPIONS are one of the world's most important rock bands of recent decades, having sold more than 120 million records to date, played over 5,000 concerts and created a timeless classic in their legendary single “Wind Of Change”, which dominated the international charts and still is the best-selling single worldwide by a German act. Countless awards, a star on the Hollywood Rock Walk of Fame and more hits such as “Rock You Like A Hurricane”, “Still Loving You”, among many others, followed. Their unbroken success impressively underlines the influence that SCORPIONS continue to have on the rock music scene. Their latest album Rock Believer will be out on Universal’s Vertigo imprint on 25 February 2022.

Rock Believer, the credo of their new album, will also be the moniker of their upcoming tour. In March and April 2022, the band are set to perform at the Planet Hollywood Resorts & Casino in Las Vegas as part of their residency, followed by a European tour scheduled to kick off with a number of shows in Germany in June 2022, with more concerts around the world in the pipeline.

Rock Believer is perhaps the group’s most characteristic album to date – a recording by a band at the pinnacle of their musical art.